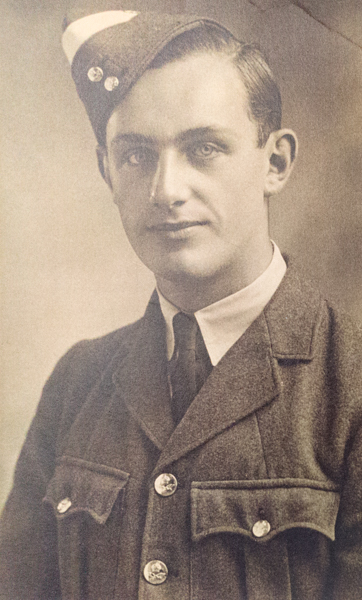 
During the Second World War, at the age of 18 all young men were required to register and were called up for service in the armed forces, without any say as to where they were sent.  Like many of my compatriots I wanted to fly, and so in December 1943, when I was 17+ I volunteered for aircrew service with the Royal Air Force Volunteer Reserve.

At the recruiting centre I, with many others, had several days of educational, aptitude and physical and medical tests at the end of which just a few of us were told we had been accepted.  We then took the Oath of Allegiance and became members of the RAFVR, and I was told I was to train as a Flight engineer. We were then sent home on deferred service to await call to a Training centre, which for some meant a very long wait.

I had previously passed the equivalent of A levels and partly because of this I was called to start my training in Durham as a member of the University Air Squadron, and my trade (as it was called) was changed to PNB -pilot/navigator/air bomber. To show that we were trainee aircrew we wore a white flash on the front of our uniform forage caps. From then on I remained in the RAF until September 1945, just after the whole world war had ended. At that time no more aircrew were needed, so some of us were transferred to the army – but that is another story.   Whilst I was in the RAF I lived in a way two quite different lives. Part of the time I was attending a series of courses learning my aircrew trade  – that is learning to do the job for which I had been accepted. The rest of the time I spent my time on detachment, as it was called at operational airfields.

The time spent on courses was very like being at boarding school. We lived in dormitories of 10 or 12 airmen, and spent our days attending lessons on all the subjects linked with our trade -theory of flight, weather, morse code and wireless, guns and ammunition, and so on; and also a lot of physical training activity, so that as we learnt we were also getting fitter and fitter all the time. We also had drill sometimes and had to learn the ways of the Air Force. Also we learnt to fire guns and had some air experience in airplanes. Some of this training was here in England, but the more advanced training was often done in North America or in South Africa.   In preparation for going off to those places we trainees were assembled together at Heaton Park, Manchester. The first time I went there I was unlucky and caught german measles. Because this was an infectious illness I was put into hospital and while I was there many of my friends went off to America to continue their training. When I left hospital I was sent on detachment (which I will tell you about in a moment). Some weeks later I was recalled to Heaton Park, and after a longer wait this time was told I was to go on my next course – which disappointingly for me was going to be in England.  I then went to what in peacetime was Derby Municipal Airport where I was to do the next part of my training – as a pilot.  But it was not to be because only about 10 days later, to the surprise of the instructors I was recalled to Heaton Park. There I was told there had been a muddle between me and another airman with the same surname and we had got switched by mistake on to the wrong course. He was meant to train as a pilot, while I was meant to become a navigator/air bomber.  SO, we were sent back out on detachment – and I never got any further with my training before the war ended and we were not needed any more, which was a great disappointment for me.

When we went on detachment we were sent to operational airfields – that is to the airfields from which the airplanes used to go to bomb targets in Europe and so on, which was about as near to the war as many airmen and women ever got.  At the airfields we lived, four to a room, in the same quarters as the trained aircrew and were employed doing worked linked directly with our trade.

Had I finished my training my job in an airplane would have been to work out and tell the pilot the route to a target and back, and to decide exactly where the bombs were to be dropped and make sure they went.   The first job I had was in the flying clothing section – the aircrew had special warm outfits for flying with all sorts of attachments and we looked after those and made sure they were in good order. We handed them out to the aircrew when they were going flying; and took them from them when they came back – only, sadly they didn’t always come back: but we didn’t have time to dwell on that because replacement aircrews and their flying clothing quickly arrived.  Then I helped look after parachutes – every flyer took one with him, and we had to be sure that if it had to be used it would open properly and quickly. WAAFs (Women’s Auxiliary Air Force), all very expert were in charge there.  Another time I worked in the maps section – when they went on an operation navigators had to have the right maps for where they were going; and when brought back they had to be checked and put away.

One of the last places I worked in, during the last few weeks of the war in Europe was the bomb dump, as it was called. There, well away from the rest of the airfield, bombs of all kinds and sizes were kept. The ones needed were checked and fused and then taken off to the aircraft loaded on a little train of trolleys towed by a tractor. Then they were hoisted up into the bomb bays ready for the air bomber to drop them over the target.    Only if the weather turned bad or the operation was cancelled the bombs all had to be taken off again, returned to the dump and made safe. At the end of April 1945, almost at the end of the war, we had to go through that process day and night for almost a week.  By the end we were VERY tired and went to our billet and slept for a long time.

All airfields like that were very spread out across the countryside, so we were all issued with bicycles while we were there so that as little time as possible was lost on the job. Also we used to work for seven days straight off and then, usually, we were allowed a couple of days off.  We could then pop in to a town if there was one near, or go for a cycle ride in the country, or if we had a ’48 hour’ pass go home for a very short leave.   We had the same leave (holiday) entitlement as the trained aircrew, which was about twice what the ground staff were given. Of course when we had leave depended on what we were doing, so for us it was usually at the end of a course.   The ‘ground staff’ were all the very necessary airmen and women doing the many back up jobs essential to get the airplanes and their crews off to their bombing work.  There was a small team directly responsible for each airplane and they took great pride in making sure that every time it flew it was in top-notch order. They worked closely and directly with the crew of their ‘plane. Then there were all the people working regularly where I did jobs, and armourers, cooks, stewards, clerks, policemen, and lots of others. One met and worked with lots of people, but they were mostly just acquaintances rather than friends and as one was ‘posted’ one didn’t usually keep in touch, but moved on with new people. I met up again with many of my friends early in 1946 when we had a reunion in Durham, when all our different uniforms showed how things had worked out for us. It is a great many years since I last met anyone who I knew in those days.

In the same week that I joined up my late brother, John, who was by then an Air Gunner, flying on operations as tail gunner in a Halifax bomber had to bale out as the plane was going to crash, and he came down safely on his parachute in Essex.  Sadly 6 months later, after doing nearly 30 more operations, and just before D-Day, they were shot down over Holland and he and all his friends were killed. Later we learned that they had never dropped bombs, but had been members of a Special Duties Squadron whose job was to drop agents, and supplies for them. As Bill had joined up for a fixed period his service continued. As bomber crews were no longer needed and he hadn’t completed his training, he was transferred, along with many other RAF Personnel to the Army. He served with The Buffs in Hong Kong and the UK, during which time he shot through the leg and deafened in one ear. These happened during training when he did time as an instructor.During this time he also helped to train the new Danish Army – I don’t know if his wounds were during this time or training british soldiers…

On the ship to Hong Kong he acted as the Ships Clerk and during his time in Hong Kong he found himself at one point in charge of a battalion of Japanese POWs and a number of Japanese senior officers awaiting trial for war crimes.

Following completion of his military service he was able to return to training for the Legal Profession at Durham University.