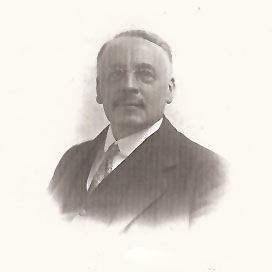 W.D.F. Vincent served his apprenticeship with Frederick Cooper, Woollen Draper and Clothier at 16 High Street in Yeovil and then, after marriage to Florence Summerhayes in 1879, he set up business briefly in Oxford and then Maidenhead as a clothier and tailor but without financial success. Whilst in Maidenhead he entered and won an essay competition on tailoring titled “The great national work on trouser cutting, or, Defects in trousers : being the first prize essay in a competition open to all members of the National Federation of Foremen Tailors” under the pseudonym “Oxonian”. As a result of this he entered employment at The Tailor and Cutter magazine.

In the early days he wrote many of the magazine articles on tailoring methods and systems but under the terms of his employment they were never attributed to him.

By the 1890s he had moved to seniority and became a national authority on all aspects of tailoring – such books as ‘Vincents on Trousers’ were standard.  (I think this refers to “The Cutter’s Practical Guide to the Cutting & Making all Kinds of Trousers” JV)

The Vincents lived in Shephards Bush, West London, moving to West Acton in about 1905. They had 5 children – 3 sons (one of whom died young) and 2 daughters.

Both sons (Will d. 1931 and Leslie d. 1943) became Doctors and GPs in West London after service in the First World War.

By 1917 WDFV was describing himself as a journalist.

In 1921 WDFV and his wife retired to Pynkhyl at Eynsham near Oxford, joining HAT Patford, a friend from early Oxford days, who I understand by then, was in the business with him.

Even in the 1950s/60s many Tailors still had as a centre piece for their window display their Tailor & Cutter Academy Diploma signed by WDFV as Chairman of Examiners – click here for an example. There is still an example to be seen on the wall of the Tailors Shop in the Museum of Welsh Life at St Fagans in South Wales.

➡ View The Cutters Practical Guide at the Costumer’s Manifesto.

➡ Read about W.D.F Vincent’s The Tailor’s Handbook of Useful Information