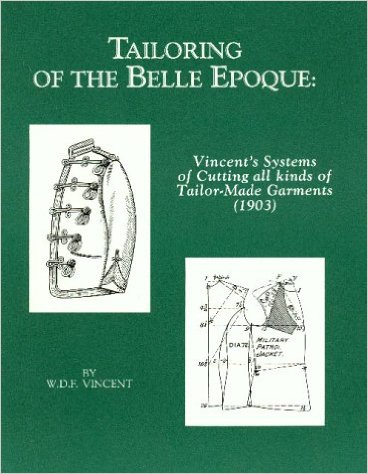 When I think of tailoring, and tailoring books, anytime between the mid-1880’s to the mid-1920’s, I immediately think of Vincent. Just as The Tailor and Cutter (of which he as the editor) was the best, so he is the best.
Vincent was born at Yeovil, in Somerset, on June 18th, 1860; and was buried on this birthday 66 years later, in 1926. He had suffered a long illness and was not very active during the last 2 years of his life.
We tend to remember him as the editor of The Tailor and Cutter and other publications belonging to the John Williamson Company for 29 years starting in 1895. We also think of him in connection with the “Cutter’s Practical Guide System” (known as the C.P.G.). He was also a very well known cutter and teacher, and, in fact was the head of the Tailor and Cutter Academy in Drury Lane. In addition to this he was the Managing Director of the entire Tailor and Cutter operation from 1912 to his retirement in 1924.
We also tend to think of him primarily in connection with men’s tailoring, but, in fact, he was a moving force in developing ladies’ tailoring as well. The ladies’ tailoring trade was just starting about the time he joined the staff of The Tailor and Cutter in 1887. He was instrumental and starting Women’s Wear which was a weekly journal of ladies’ tailoring along simple lines and containing all the latest fashions.
But there is another side to him, and that is in the area of social issues about which he held very strong opinions. He was a non-smoker, a teetotaler, and very interested in children and the National Children’s Home. He also was a Quaker and a medal winning cyclist.
Probably the best way to understand the man is by his own words. The following is from a lecture he gave to the Glasgow and Edinburgh (tailor’s) Societies:
“I dare say some of you have pet hobbies, theories, ideas or systems, which you not only feel proud of, but you dote over them, and nothing pleases you better than to see or hear your hobby brought into prominent notice. Now that is just my position to-night, for I have my pet theories; subjects that I could talk on from January to December, and not feel tired of them; and when Mr. Leggatt (another famous tailor -ed.) asked me to come and address you I naturally trotted out those subjects
which lie nearest my heart. But, gentlemen, in the wisdom of your committee, you have decided that I shall talk to you tonight on one of the dry subjects; and as you know I must not allude to my other hobbies, I will tell you the nature of the man lam. In the first place I am a tailor; in the second place I am a total abstainer; and in the third place I am deeply interested in many of the social problems connected not only with the welfare and progress of our own calling, but also over the world at large: such, for instance, as technical education, the abolition of sweating, the payment of workmen, and many other subjects. It is because of this love I have for my profession as a tailor, which, as doubtless you know, I hold to be second to none, that I was desirous of dealing with one or two social questions, and giving my ideas of the loss our profession has to bear, and the degradation and misery that is wrought in the lives of our fellow craftsmen by the drink abomination; for, gentlemen, I hold very strong notions that this demon is one of the most fruitful sources of sweating. It first of all stands as a bar to respectable young men entering our craft for fear of acquiring those habits which become by repute so intimately connected with the board; and even when this difficulty is got over, it makes the workman lose all his self-respect, and this renders him a ready prey for the sweater. But I must not forget, gentlemen, that it is not your wish for me to deal with these subjects, so I will be content to know and believe that you are sufficiently teetotal to hold your meetings away from the bad influences of the public house, an example that might be profitably followed by every Foreman Tailors’ Society in the Kingdom; and that you are sujficiently socialistic to band yourselves together in a society to work hand in hand for the common weal, each giving his brightest and best to further the interest of every member of the society, which as you all know is the basis of socialism.”