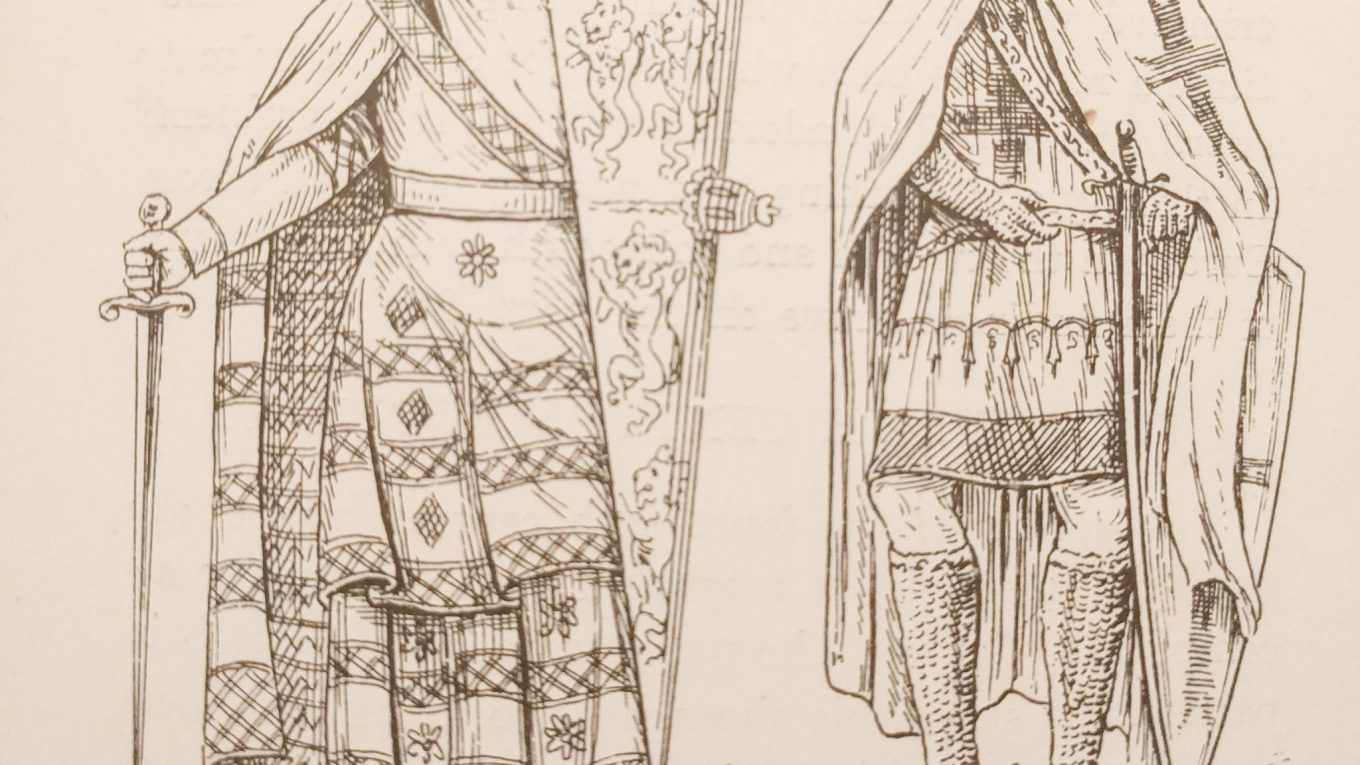 This is from the fourth to the seventh parts of the the handbook looking at the history and philosophy of  clothing. I haven’t included everything from sections IV, V and VI, as there many books available today that look at the history of clothing in greater, and more up to date, detail. I have, however, included the pictures and a precis of those sections.

IV – Dress of the Ancients

In this section WDF makes and an assumption that a number of apprentices would belong to a literary society and that they have undertaken the arrangements for an evening, the subject being “The History of Dress”, dealing with the times before Christ. He mentions books that may help with the subject: Oxford Teachers Bible, The Cyclopedia of Costume by Planche and The Costume of the Ancients by Thomas Hope. He then provides a description alongside each of the following pictures written as though they are being presented at a meeting – I haven’t included those descriptions. Here WDF invites the reader to listen to a few stories connected with garments which have a more or less historical interest. He first discusses the coat of many colours worn by Joseph and other garments referred to in Scripture including “The Holy Coat of Treves”, stated to have been discovered by the Empress Helena in the fourth century. He then passes onto garments in the Classic Writings , such as the Golden Fleece, and the Coat of Nessus along with a funny story from the writings of Baron Munchausen where a mad dog was confused with a fur coat… Next in this section, he looks at references to garments in English History. Cloaks worn by Kings, The Field of the Cloth of Gold, Sir Water Raleigh’s Cloak, and the use of clothes to disguise, such as in the escape of Bonnie Prince Charlie.

Then we have heroic references including: …the unveiling of a window at Horfield Church, Bristol to commemorate the action of a brave boy who, wandering with a younger lad lad in field near Bury Farm, was overtaken by nightfall. He laid his little companion under the hedge, and, taking off all of his own clothes but his shirt, covered him up till the morning. When a labourer found them, the younger boy was all right, but his brave companion died from the effects of the exposure. He then wonders at the dress of the Pied Piper and finishes with the comments that the subject of this section is: …by no means exhausted and that sources of scripture and mythology, ancient and modern history, pathetic and humourous records, legendary lore and current incident have all come under review…

VI – The History of Dress in England

This section contains almost 20 pages of information from early British dress (woad and cow hide) , Druids, Anglo-Saxons, Normans, Crusaders, Fourteenth Century Foppery (WDFs words not mine!), Fantastic Fashions (of the 17th Century), Puritan Patterns, and Eighteenth and Nineteenth Century Styles, ending with a reminder for the reader to look at the pages on the “Tailor and Cutter” for the most recent fashions. Of course, this is the magazine that WDF was the editor of, so it would be remiss of him not to get in a plug at some point. …So ends our brief sketch of the history of dress, and from this you will gather how much force there in the saying that “the clothing indicates the man”…

VII – THE PHILOSOPHY OF CLOTHES

I have now to introduce you to a rather long word, viz., Philosophy, which means a knowledge of phenomena, as explained by, and resolved into, causes and reasons, or, to put it into simple language, a number of rules or principles by which the expressions or signs of any subject can be understood. Now, this applies to clothing on that the “apparel of proclaims the man,” and today Society pays its respect or disrespect to the person according to the way he or she is dressed. For instance, it is said that on one occasion Cogia Effendi, the wise man of Persia, dressed as a beggar, and entered a house where a grand feast was being held. He was hustled by one and another, pushed here and there, and was not noticed kindly by anyone. So Cogia left and went home. He then arrayed himself in splendid style, with jewelled shoes on his feet, a robe of cloth of gold on his back, and a turban glittering with diamond aigrette on his head. Hanging from his was his sword, from the hilt of which flashed costly diamonds. He made for the feast. His entrance was at once the signal for attention from all sides. The guests, who before had so rudely pushed him aside, now made easy for him to pass to and fro. The host came hastily towards him, with the words: “Welcome, my Lord Effendi, thrice welcome; what will your lordship be pleased to take?” In reply, Cogia quaintly, by expressively stretched out his foot, so that the jewel on his shoe sparkled, and then, taking his golden robe in one hand, and holding it away from him, said, with bitter irony: “Welcome my Lord Coat, welcome, excellent robe; what will your lordship please to take me for”, said he, turning to his perplexed host, “I ought to ask my coat what it will take, seeing that my welcome was solely due to it.”

A gentleman’s servant put on his master’s clothes, and was caught by him bowing to himself in front of a large looking glass. When asked for explanation, he replied, “Well don’t everybody bow down to fine clothes?” Are not the devout men, wise men, influential men, God-honoured men, thrust aside for one whose millinery and jewellery are more costly? Charles Dickens wrote (in Oliver Twist): “A Field Marshall has his uniform, a Bishop his silk apron, a counsellor his silk gown, a beadle his cocked hat. Strip the bishop of his apron, or the beadle of his cocked hat and gold lace, what are they? Men – mere men. Dignity, and even holiness, too, sometimes, are mere questions of coat and waistcoat, than some people imagine.”

Carlyle wrote: “Society is founded upon cloth; clothes give us individuality, distinctions, social polity; clothes have made men of us.” Again he says: “You see two individuals, one dressed in fine red, the other in coarse, threadbare blue. Red says to Blue ‘Be hanged and anatomised!’ Blue hears with a shudder, and, oh, wonder of wonders! Marches to the gallows, is there noosed up, vibrates his hour, and the surgeons dissect him and fit his bones into a skeleton for medical purposes! How is this? Red has no physical hold of blue, is no wise in contact with him. Nevertheless, as it is spoken so it is done, the word of Reds sets sheriffs, lieutenants, and hangmen to work and rope and drop to do their work, simply because the clothes of Red signifies that he has been placed in authority.” He also gives us a contrasting picture by inviting us to “imagine some of the pompous Ceremonials when Duke This is presented by Archduke That, and Colonel A by General B, and innumerable Bishops, Admirals, and other functionaries are advancing gallantly to the the anointed presence, and then, as by some enchanters wand, the clothes fly off the whole group, and Dukes Grandees, Bishops, and Generals, and even the anointed presence itself stands stripped of everything to signify their rank and only their humanity is apparent.”

The necessity of some indication in the clothing to indicate the rank was experienced at Glasgow, where, till within the last year or two, the Superintendent of Police wore ordinary clothing, and it was found that so attired he was unheeded by the crowd, who took no more notice of his word than that of an ordinary individual, and it was decided to give him a uniform to indicate his authority, and now the crowd realise that behind his word there is the power of the police force, and it is with such a message it speaks to them. Again, we have a wonderful setting of this truth by Charles Dickens in his “Sketches by Boz,” where he describes the former wearer of certain old clothes he notices in a second hand shop, and as he portrays their history you realise the truth of his vision and that much more is written in clothes than is at first sight apparent. You should read his “Meditations in Monmouth Street” in his “Sketches by Boz,” as they are both interesting and instructive. The practical lessons you should learn from this subject are (1) to look beyond the clothes and see the man, for it is still quite possible to find the wolf in sheep’s clothing or the thief in the Parson’s dress, and (2) to use care in the selection of your dress, for, whether we acknowledge it or not, the fact is, people will estimate is by the dress we wear, so select your clothes carefully, and advise your customers to select those styles and materials most in keeping with their character and occupation, for such will give them far more satisfaction than any other.

➡ The Cyclopedia of Costume

➡ The Costume of the Ancients

➡ The Holy Coat of Treves