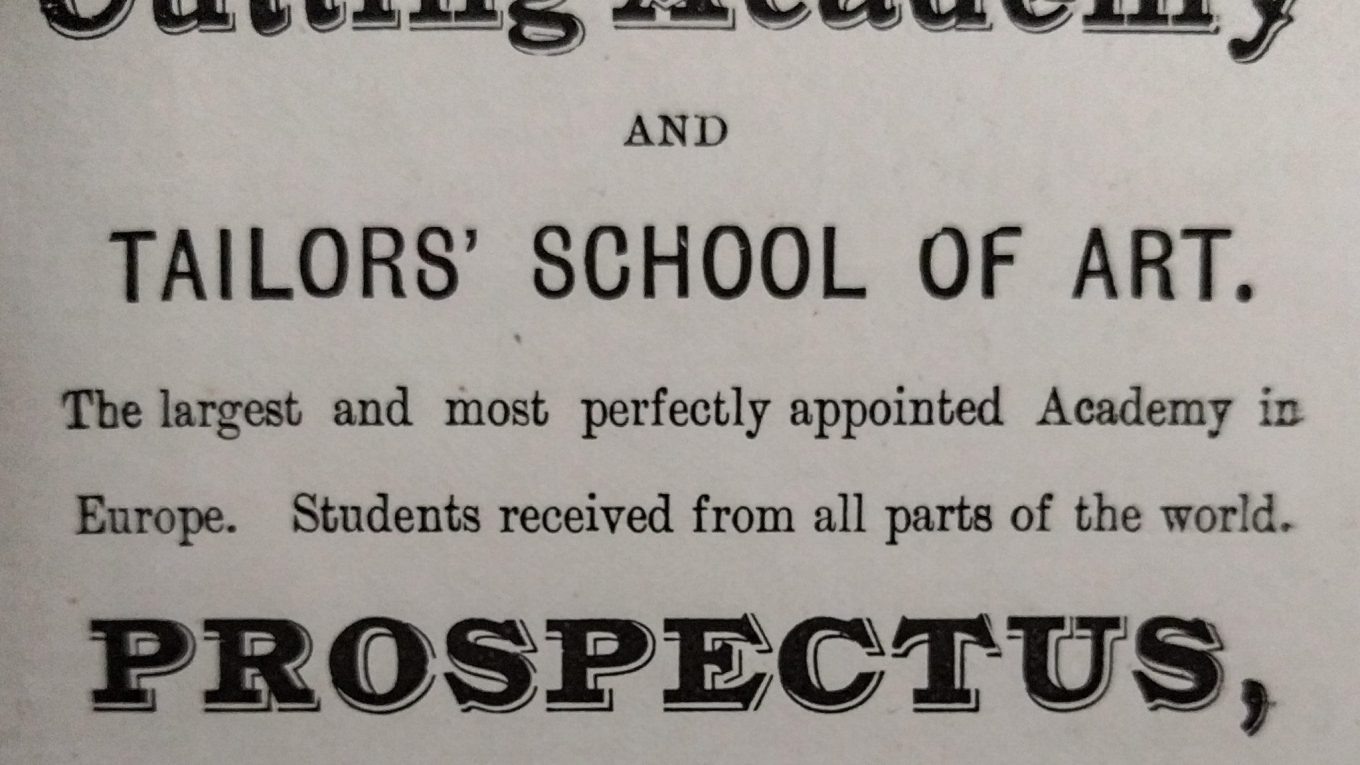 These chapters appear towards the end of the original handbook, however as it gives a context to the numbers of Tailors in the overall population, I felt they would be more appropriate to start with.

The Noble Army of Tailors

I want to place before you a few figures to show you the numerical importance of the trade of which you are the youngest members, and are, I trust, the coming men. As you are doubtless aware, it is the custom to take a census – or an official enumeration of the people – every 10 years in the United Kingdom, and, when doing so a number of particulars are taken showing the ages, trades, birthplace, etc. of the inhabitants. The last census was taken in 1901 and the total population of Great Britain was then found to 41,454,578 and of this number 4,536,541 lived in London. Since these figures have been published, the other items supplied on the papers have been arranged, and some very interesting details, dealing with the inhabitants of London have been elicited, and especially in connection with tailors. To begin with we head the trade list with a total of 80074, indeed, the next most numerical trade is less than half that number, for although the second place is allotted to the bootmakers, yet they only number 39,610. During the last thirty years the number of tailors in London has increased to such an extent that there are nearly twice as many now as they were in 1881, and in order to show you how we, as a trade, has grown, I will give you the figures of the last five censuses:

It is an interesting problem

To know what is the cause and, personally, I am of the opinion the sewing machine has had a great deal to do with it, for its application to Tailoring was the work of the last half of the last century. The outcome of this was the development of the ready-made trade, and the cheapening of bespoke goods so that where fifty years ago the working man had to content himself with the cast-off garment of some favourite of fortune, now he can purchase a new garment, either made to his own order or select one from ready made stock. That, however, is not the only factor that has produced this change. There has been a steady influx of population to the larger centres, it being a notable fact that whereas the increase in the population of country districts in ten years only amounts to 2%, the increase in towns and cities in the same period is nearly 20%, and town living people pay more attention to the formalities of dress, and so require a larger number of garments. To this must be combined the fact that wages have considerably increased during the past fifty years, and the price of woollen goods have reduced so that people can afford more and better clothes than heretofore.

There is also the rapid development of ladies tailoring which has taken place in the last fifty years, and which find employment for such a large number of tailors, especially in London. Then there has been the development of the juvenile suit trade, which has now assumed such immense proportions, and employs quite a large number of hands, a trade which fifty years ago, was hardly known. The children of that age being largely clothed in home-made productions which, in many cases, were cut-down garments of their older brothers or their parents.

The export trade in ready-made clothing is also a large one, but the probability is that Leeds and Glasgow, and other places, do more in this way than London does.

These figures also show that the great outcry there has been during recent years about the scarcity of tailors has its rose in the fact that so many more tailors are needed today than was the case in bygone years, and that the scarcity does not lie in a smallness of numbers, for tailors in London are more numerous than ever.

Another remarkable fact proved by these figures is the rapid growth of tailoresses. In 1891 there were 21,872 tailoresses in London, in 1901 there were 41,270, and from what we have observed, we are inclined to think this is typical of what is going on all over the country. The male tailors have increased by something like 8,000, but this is a small matter compared with the increase in female labour, the question naturally arises to whether this is due to the difficulty there has been getting men, and the known ability of the woman with her needle, or is it the natural outcome of a collective system of labour.

Now let me give you the figures of 1901, as far as they refer to London. By London is meant the administrative county created under the provisions of the local government act of 1888 from parts of the ancient counties of Middlesex, Surrey, and Kent. It is bounded on the north by Edmonton, on the south by Croydon, on the east by Dartford, and on the west by Brentford, an area of 74,839 statute acres, containing a total population of 4,536,541. Tables are given showing the occupations of males and females ages ten years and upwards. Here we find the following figures:

It is interesting to note the different parts of London occupied by these, and the following list of tailors and tailoresses in the more central parishes will prove of interest:

The ages of this portion have also been tabulated, and are distributed as follows:

From this it will be seen 34 males and 110 females are returned as over the age of 10 and under 14, while 272 men and 112 women give their ages as upwards of 75 years. These are still actively employed, those “retired” being given in a separate table. This gives 657 male and 671 female tailors as having retired, but, unhappily, the nature of the retirement of 339 of the former and 543 of the latter is indicated by “in workhouses, workhouse infirmaries, and lunatic asylums.”

The census figures also show that it is a trade which can be followed longer than almost any other, as there were 384 engaged in it when the return was made that were 75 years of age and upwards, and this is largely due to the system of piecework which prevails, as by that method the older men are not ousted by the younger and more energetic workers.

There is just one other lesson these figures teach us which is of especial importance to you who are just beginning life, viz., your destination when you retire. The figures show 657 men as retired tailors; some of these have their comfortable home and sufficient luxury to enable them to end their days in peace and quiet, but quite half of them have had to take refuge in workhouses and infirmaries, where they are fed and clothed by the state. If you would avoid this latter end you must start will, keep steadily are it in middle life, and make such provision for old age as we will enable the needle and shears to rest, or to be taken up by those who follow us.

Taking a calculation on the above returns, we find there is one tailor to every 55 or 56 inhabitants, or, to put in other words, it takes over 50 people to make one tailor. If the London proportions hold good for the whole of the United Kingdom, then there are 731,720 tailors in Great Britain, an estimate which, we think, is pretty near the mark. Supposing that the London proportion holds good for the world (which is, perhaps, a little sanguine), and taking professor Grandeau’s estimate of the world’s population in 1889, viz., 1,429,000,000, then there are 25,223,115 tailors in the world.

Now of these there is probably one cutter to every 25, for whilst in the best bespoke trades the cutter would only cut for 12 to 14 men, yet in the cheaper trades that number would be largely increased, so that an average estimate of 1 cutter in every 25 would be about fair. This gives us 3,203 cutters for London, 29,268 for Great Britain, and 1,008,924 for the world.

Where the tailors come from

The cosmopolitan nature of the tailors of London comprising, as they do, upwards of 25 nationalities, shows that the principals of tailoring learnt in one country can easily be applied to garments of another, and as some day you may have a desire to see the world, the probability is that you will be better equipped with your trade as a tailor than would be the case for any other calling.

The foreigners engaged in the tailoring trade in London total 16,629 of which 13,156 are males and 3,473 females. Their birthplaces are as follows:

Curiously enough there are four blind tailors, and 94 deaf and dumb, and of these latter 60 are females

In addition to the interesting table of nationalities, we also learn that of the present race of London tailors only about 35% of them are London born, the remaining 65% being either born in the country or abroad

We also learnt that 40% of the tailors of London live under what are known as crowded conditions, and nearly half of these have only one room to every three persons. Against this has to be set fact that 60% living comfortable conditions, and over half of these have less than one person to the room, or, in other words they have, say, an eight or nine roomed house for every seven persons to live in, which indicates fairly comfortable circumstances.