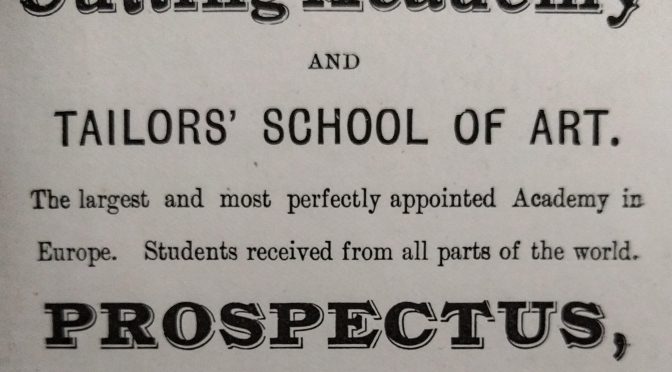 This is the first part of the The Tailor’s Handbook of Useful Information which mostly exhorts the health benefits of the Tailoring Trade.

Some while ago I was invited to visit a number of lads who were learning how to become tailors, and as I saw them on the board busy with their needle and thread and their sleeve board and iron I could not help thinking of these possibilities that lay before them, and I had a strong desire to congratulate them on their choice of trade.

Now, I know there are many more lads who are in the same position as the young friends I met, so I purpose writing them a series of articles in which I shall offer them a few thoughts on those subjects which will interest then in their trade and instruct them on the mysteries as well as inspire them with a desire to excel.

THE ADVANTAGES OF TAILORING

In this my first article I want to place before them the advantages of the tailoring trade, for I am quite aware that there are many silly people in the world who try to make fun of the tailor and treat him with contempt.

Note such a course at once stamped them as people of small mind, for the cleverest men of the century which has just closed have striven to give the tailor his right place in society by the spring that, but for him and his work, society could not exist; but of this I shall have more to say later. To begin with, tailoring is not a laborious trade that has to be carried on under uncomfortable conditions, and exposed to all sorts of weather. On the contrary, it is a nice easy occupation that is pursued indoors, where the surroundings may be made very comfortable. Of course, I know some will not like sitting cross-legged all day long, but this one will soon get accustomed to, though I hope the time is not far distant when this foolish custom will be abolished, and tailors will sit on s stool or in a chair with a suitable table to work at. That such a change will come I have no doubt, but in the meantime tailors have to become accustomed to the cross-legged position, and the sooner this experience is over the better. Now, in the next place, tailoring supplies a universal need – at any rate, in civilised countries, and is, therefore, worthy of all respect. How different it is, alas! with the brewer, the gambling bookmaker, etc. they are quite unnecessary- indeed, it would be a good thing for our trade and our country is they died out, as they only pander to the vices of humanity, whereas we supply that which gives comfort, decency, and adornment, so that, with the exception of food, we supply the most indispensable commodity.

It will soon be found there is a very great art in tailoring; it will give the learners something to think of; and as they see a beautiful garment evolve from their labours they will be filled with pride, and a real love for tailoring will develop in their breasts, which will in no way diminish as they again reflect that this garment is ministering to the wants of humanity and is adorning the masterpiece of creation.

REGISTRAR-GENERAL’S REPORT OF THE MORTALITY OF TAILORS.

In a voluminous report just issued by the registrar-general of England and Wales dealing with the mortality of men engaged in different occupations, some very interesting particulars are given respecting tailors as a class.

The number of tailors above the age of fifteen years, enumerated at the census of 1891 was 116,278, and the number of deaths registered amongst this body in the years 1890-1-2 was 6,685. The ratio of the mortality of tailors to that of males generally was 989 to 1,000. Whatever may have been the case formerly, the figures note at our disposal do not warrant the statement that tailors are an intemperate class of men, for the subjoined table shows that their mortality figure for alcoholism is below that of “all males” generally; whilst the figures for diseases of the liver are scarcely above the same standard. Tailors due much faster than the average from phthisis, probably because of the unwholesome conditions under which their work is often carried on. Their mortality from bronchitis is also considerably in excess of the standard; whilst, on the other hand, their mortality from influenza, pneumonia, and diseases of the circulatory system, is considerably below it. A glance at the following table will show in detail how the grand total of 6,685 deaths is made up, and the comparative mortality figure for each disease :-

This the death rate amongst tailors works out at rather over 19 per 1000; or to put it in a way that is perhaps more easily grasped, every workshop or society numbering 52 members may expect, according to this average rate of mortality, to lose one of its members by death every year.

THE HEALTH OF TAILORS

I also want to tell them that tailoring is a healthy trade, for although tailors supply a larger number of victims to consumption than many outdoor occupations yet I am of opinion that this is caused by wrong conditions rather than any inherent unhealthiness of the tailoring trade. Given a healthy and well ventilated workshop, a proper share of physical exercises and a die observance of the laws of nature, there is no reason why the tailor should not enjoy the best of health and keep in the jolliest frame of mind (see registrar-general’s report)

Tailoring, too, is fairly paid; the average journeyman can easily equal the wages earned by the painter, the carpenter, and similar occupations, whilst he has the advantage of following an occupation that does not require an expensive set of tools or an elaborately prepared workshop, do that looking at it from the financial standpoint there is every reason for encouragement.

Further, tailoring offers the fullest scope go advancement; there is plenty of room for progress from apprentice to journeyman, from journeyman to cutter, from cutter to master, and from matter to retirement on a good income, and I think the upward journey is easier on tailoring than in most other trades, for the facilities offered for the study of cutting and the artistic side of tailoring are so numerous that any young man may if he chooses qualify himself for that position.

Before I finish these articles I shall tell you of men who have made great names for themselves in other walks of life who started as tailors, but that is not the point I wish to impress upon you now, but rather to remind you that the tailor may hold offices of honour with any man. He may be a town councillor, an alderman, or a mayor, a member of parliament, or even a cabinet minister, and I shall tell you of men who have done practically all of these things and have still been proud of their calling: here is an illustration:

Isaac Hopper, the distinguished Quaker philanthropist, was received as the guest of a noted family when he came to London, and whilst there he received an invitation from another family whom he was informed were very respectable but not exactly of the first circle as their father was a mechanic. To this remark Mr Hopper replied “well I am a mechanic myself, for i followed the business of a tailor for many years. Look at my hands, they bear the marks of the shears. Some of the mayors of Philadelphia have been tailors. When I lived there I often walked the streets with the chief justice. It never occurred to me it was any honour, and I don’t think it did to him.”

Note I want you to determine that you will become really first class tailors by learning the details of your trade thoroughly. Be enthusiastic over your work, and you will soon find your fellow-members of the trade will be proud of you, and the public generally will sell your skill and will be ready to reward you liberally for your efforts on their behalf.

This website uses cookies to improve your experience while you navigate through the website. Out of these, the cookies that are categorized as necessary are stored on your browser as they are essential for the working of basic functionalities of the website. We also use third-party cookies that help us analyze and understand how you use this website. These cookies will be stored in your browser only with your consent. You also have the option to opt-out of these cookies. But opting out of some of these cookies may affect your browsing experience.
Necessary Always Enabled

Any cookies that may not be particularly necessary for the website to function and is used specifically to collect user personal data via analytics, ads, other embedded contents are termed as non-necessary cookies. It is mandatory to procure user consent prior to running these cookies on your website.